The anticipation for this vintage was already building at our annual Burgundy tasting earlier this year in January, with many producers whispering excitedly about the 2019s, hailing it as a truly exceptional vintage, though sadly noting that quantities are down on 2018. In 2019, many seem to have reconciled the irreconcilable, combining freshness and finesse with incredible concentration. 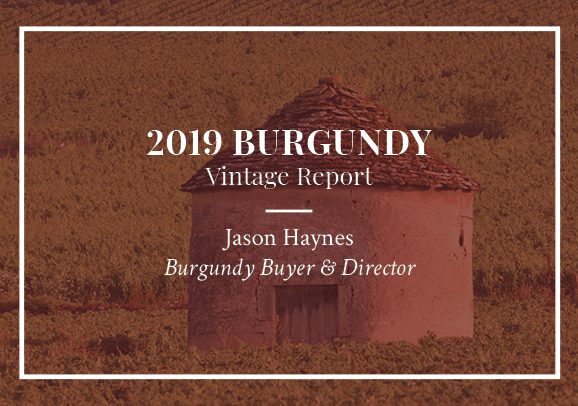 2019 is the middle-leg to a fascinating trio of sunny vintages that will inspire much debate over the coming couple of decades. It seems funny to say that it was the ‘late’ vintage of the three, being that it began relatively early in the first half of September, but the days of harvesting deep into October seem to be well behind us. In both 2018 and 2020 vintages vignerons had started picking in August, and this year many had even finished in August which was a first for them.

Other than stating that the 2020 Burgundy vintage might be one of the few great things to emerge from this depressing year, it’s too early to dissect its specific merits, so here we will focus on 2019, whilst making relevant comparisons to its predecessor.

Meteorologically, the two vintages have much in common. The summers were both dry and very warm with plenty of sunshine, average temperatures well above normal and average rainfall well below. However, the similarities stop there. Perhaps the most significant difference was the success of the flowering, or lack of it in the case of 2019. Whilst it happened without drama in 2018, resulting in an abundant crop in certain villages, in 2019 it was more complicated. The inclement weather in early June created a significant amount of millerandage (small berries) and a huge reduction in potential crop size. This was further exacerbated by the lack of rainfall over the next three months which dehydrated the small grapes and meant, come pressing time, there was very little juice to be had. However, there is an upside to all these issues. Small berries mean not just concentrated juice but concentrated everything. So, whilst sugar levels and potential alcohol levels were high, so was the all-important acidity. Yes, growers had to be careful that they didn’t allow alcohol levels to run away from them, but in reality, some wines with higher than usual alcohol levels seem incredibly fresh and lack a sense of ‘heat’ that some 2018s display. The pH levels are good and on the best white wines, there is a wonderful sense of dry matter (matière) which leaves the palate salivating and refreshed.

As regards the white wines, whilst it was generally accepted the generous size of the 2018 harvest helped save the vintage by dissipating its heat, it seems that the low yields of 2019 have had as much positive impact by creating wines of great intensity without any heaviness. Of course, some wines seem a little too much, but generally, the whites are extraordinarily impressive and built to last too, with plenty of stuffing to back up their freshness.

The red wines have not missed out on this sense of freshness. Whilst yields are more variable, they are still well below those of 2018 and it’s the quality of the tannins, matched with that same vibrant acidity (I did not expect to describe so many reds as crunchy in 2019) that gives them a real sense of sheer joy. They seem wonderfully harmonious, focused and remarkably Burgundian. Credit must go to growers’ agile approaches in the vineyard, their refusal to simply tick boxes and follow the crowd. Like the whites, the wines have great intensity, but they also have purpose and drive, a must for any lover of Pinot. With such balance and concentration, these wines should age very well indeed.

It’s a little too early to say just how good these wines might be, but then again, from a vintage ending in a nine, the bar is raised pretty high!