One cannot deny the allure of a big bottle.

Yes, they’re great for a celebration but speaking vinously, they are proven to improve the quality of the ageing. The ratio between the amount of oxygen entering the wine, to the volume of wine, changes in favour of a slower and more nuanced ageing process. This goes in both directions, and one can drink half bottles much earlier in their life, although there is a greater risk in half bottle variation as a result. What is more, the larger the bottle, the thicker the glass will be, and the less effected the contents of the bottle will be to temperature variation.
Bigger, however, does not always mean better. With anything beyond a Methuselah, there can be issues with the cork, perhaps as a direct result of the rarity that one seeks, is the lack of practice in corking. In Champagne, due to Méthode Champenoise, most champagne houses do not have the facilities for a rack to age an abnormally large bottle and disgorging them would be difficult. Instead, in the ‘transfer method’, unusually large bottles are made up by pouring in normal bottles – with an obvious negative effect on the liquid inside.
The already scarce supply of Burgundy in ‘normal’ bottles means large bottles, especially at the extreme end, are particularly rare to find and are probably non-existent beyond a Methuselah. In fact, few Burgundians bottle in anything larger than a Jeroboam.

As winemakers (especially dare I say, French ones) do not like to follow the rules, there are different names for the same size depending on the region. Equally, one name can mean different sizes depending on the region. Nowhere is this more palpable than for a Jeroboam.
Most of these bottles are named after biblical Kings of the Old Testament, perhaps to denote the wealth and supremity of each bottle. And, as one delves deeper, it seems many of these kings are infamous for their show of extravagance: all that a big bottle would denote if one did not know of the vinous improvements to be had. There have been arguments to state that “Jeroboam” was not intended to be a biblical reference at all, but once it was defined as such, the rest followed suit, perhaps humorously intended. As we go up the scale, depending on which interpretation of the word you take, the Old Testament kings do adopt a neat chronological order.

Jeroboam was the original biblical King to lend his name to a wine bottle, and the following bottles appear to be imitations of this. Jeroboam translates to “he increases the people” – was this, in fact, the original intention for the name, but the Kingly translation was taken, and thus the tradition born? He also fought a long power battle with Rehoboam (see below). A Jeroboam in Champagne or Burgundy is a 3L bottle (4 bottles in one), also referred to as double magnum. In Bordeaux is it a 5L bottle, though pre-1978, it referred to a 4.5L bottle. Occasionally 5L bottles were found in Bordeaux pre-1978 and 4.5L bottles after 1978, so do double check when buying a Jeroboam of that period.

Another dual meaning – translates to ‘he who enlarges the people’. However, the kingly translation binds in nicely with the “Jeroboam” and “Solomon”. Rehoboam was the Son of Solomon, as such, grew up in a life of luxury. What speaks more of luxury than an abnormally large bottle? There was continual warfare between Rehoboam and Jeroboam, but they shared a strain of arrogance, vanity and idolisation of false gods – a theme is born. Rehoboam refers to a 4.5L bottle in Burgundy and Champagne.

The oldest man in the Bible, he lived to 969 years and today symbolises anyone of great age. A rather apt name for a long-lived bottle albeit with no royal ties. This refers to a 6L bottle (that is eight bottles in one) and is the largest format found in Burgundy. The term is also used in Champagne.

This name could derive from five Assyrian Kings – the two most well known of these being Salmanazar II and Salmanazar V. The latter of which completed the conquest of Israel and the deportation of Israelites. This is a 9 litre bottle, a case of wine (of 12) in one.

One school of thought is that the name refers to one of the “Wise Men” however this New Testament tale does not follow in our Old Testament theme. The other theory is that of the regent of Babylon, Belshazzar, the last King of the Neo-Babylonian empire. Rumoured to be the son of Nebuchadnezzar (see below), although latterly this is found to be propaganda to imply greater lineage. Belshazzar’s feast has inspired two great works of art – a Rembrandt of 1635 depicting the King’s enjoyment of food and wine – and perhaps, gluttony. Secondly, Belshazzar’s Feast by William Walton – one of the greatest choral works of the last century. Personally, I like the idea that it is linked to Belshazzar, as the joys of music, art and wine are so intertwined, notwithstanding that it builds on the emerging pattern of Old Testament Kings. A 12L bottle (that is 16 bottles in one).

“King of Babylon” A brutal and powerful King of whom God routinely attempted to tame his arrogance through dreams. He is known for dreaming of his own downfall along with temporarily losing his sanity. God found his wrongdoings to derive from glutton and vanity. An odd choice of name, or a continual attempt at humour? Either way, it refers to a 15L bottle of wine (20 bottles) – great fun, but not for the one pouring!

Another of the “three wise men”. An anomaly of course in respect to the kings of the Old Testament and the 18L bottle is only found in Bordeaux. Two full cases of wine (24 bottles) fit into this gigantic bottle. Was this bottle size and name added on at a later date as an outlier perhaps?

“King Solomon, the wisest of all men, built the Temple in Jerusalem” The wealthiest and most powerful King of his time. According to Divine Vintage, by Heskett and Butler, 80,000 cases of wine were sold to fund the build of the famous Temple of Solomon. He was known for his wisdom and extravagance that soon turned into idolisation of false deity. 18L bottle (24 bottles). Although the exact volume this is often disputed.

As the famous tale goes, Goliath, a Philistine giant, was defeated by the young (normal-sized) David. A fine choice of word in respect to bigger is not always better. This extra-ordinary 27L bottle (that is 36 bottles in one) requires serious consideration in regards to how one would open it, let alone pour.

The largest known wine bottle. Melchizadek was a great high priest and semi-divine. Although there is a quote in Genesis directly relating to wine, one would not denote him as gluttonous or arrogant. Midas, on the other hand, seems a more logical name for this giant of a bottle. Referring this time to Greek mythology rather than to biblical kings, it continues the recurring theme of naming bottles after characters of extravagance. The ‘Midas touch’ turned all he touched to gold, which seems a rather appropriate name for a 30 litre Champagne bottle.

The solving of this puzzle as to where, and how, the words derive would be greatly aided with an idea of when the bottles were invented, but alas, it remains a mystery for now. The striking observation is that the majority of these large bottles are named after characters notorious for their gluttony and extravagance – an interesting revelation. I find it to be perhaps a tongue-in-cheek comment on each bottle – a fairly light-hearted jibe that makes each bottle all the more befitting for a party. Nonetheless, a jeroboam to me feels the optimal size – balances perfectly the fun and extravagance with the vinous improvement. But who am I to disagree with a rather well-known and well-lubricated politician… “a magnum is the perfect size for two gentlemen to have over lunch, especially if one isn’t drinking.” – Sir Winston Churchill 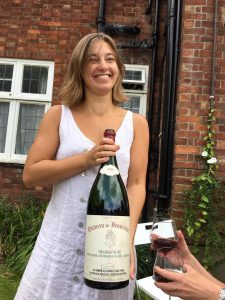 9 Questions with Inspiring Women in Wine Gigliola Giannetti is the founder, owner and winemaker…

In Conversation with Diana Seysses

9 Questions with Inspiring Women in Wine To celebrate International Women’s Day, we are launching…

“With a drop of Champagne, you can change your own universe” Phillippe Stark Hurray for…
Discover More Blog Posts