The nec plus ultra of German Riesling

Widely regarded as Germany’s oldest city, Trier (pop. 110,000) is home to no fewer than six UNESCO World Heritage sites – many of them Roman – and was the birthplace of Karl Marx. It also plays host to one of the most exciting events of the Vinous calendar: the VDP Prädikatsweinversteigerung (Prädikat wine auction) for the Mosel region. The auction is in many instances the only opportunity to buy the most prized bottlings from members of the Grosser Ring, the aristocracy of wine estates from the Mosel, Saar and Ruwer.

Typically taking place in September, this year’s auction – the 134th – was pushed back by a later harvest in 2021 to Friday last week. The auction followed a frankly mind-blowing tasting of a selection of the 73 wines on offer, the vast majority of them from the 2020 vintage.

2020 was a cooler year than 2018 or 2019, albeit one with a precocious growing season and relatively early harvest. Chilly nights from August onwards maintained very high levels of acidity and kept botrytis largely at bay. Growers reported a crop of pristine quality, though it was necessary to hurry to finish the job before the rain set in in mid-October, meaning little Auslese was made (and even less BA and TBA, which rely on botrytis occurring).

The verdict from the growers we work with is unanimous: 2020 is a truly great vintage for Kabinett wines in particular. The best boast sublime balance, combining a wealth of ripe fruit with pulsating acidity and a mineral imprint that will become more prominent over the coming decades. Typically lower in alcohol than the ‘18s or ‘19s, another characteristic of the 2020s is simply how refreshing and digeste they are – categorically, they will be wines to enjoy at every stage of a meal, as well as before after and, of course, on their own.

We are today delighted to offer five wines purchased at last week’s auction. Based on the quality of the producers and the vineyards, all were pencilled down on our wishlist prior to the tasting, then were emphatically underlined during its course. These are offered at the sterling equivalent of the hammer price plus a 5% commission. VDP Auction Releases represent the nec plus ultra of each of the wines in question; the most exquisite fuder, barrel or tank as selected from their cellar by the winemaker him or herself. The size of the lots varies, but this year ranged from a single bottle to a maximum of 600 bottles. Bearing a special versteigerung label, they command a premium over “regular bottlings” and can be highly collectable.

Scroll down to see the wines

This historic Saar estate, overlooked by the looming Altenberg Grosse Lage (Grand Cru) vineyard, flew under the radar for many years but is motoring under the stewardship of Günther Jauch, a well-known journalist and TV presenter in Germany. Herr Jauch has an enviable 8.5 hectares in Altenberg, which are farmed organically. Here, the southerly exposition combines with the Saar’s cooler mesoclimate to give a juicy and expressive wine whose inherent power is kept in checking by bracing acidity and a cleansing, saline finish.

Oliver Haag produces some of the most exquisite, filigree Rieslings the Mosel has to offer. This sensational Kabinett hails from the Juffer vineyard’s renowned Sonnenuhr (sundial) sector, where the wines are shaped by long sunlight hours and steep slopes of blue-grey slate. At the hands of the Haag family, Juffer-Sonnenuhr delivers a Kabinett that for all its ripe fruit, is defined by minerality and te

Perhaps Germany’s most celebrated winemaker, Egon Müller knocked it out of the park in 2020, producing a set of wines that wowed all present at the pre-auction tasting. Closing at 385€ per bottle, his Scharzhofberger Alte Reben Kabinett set a new record price for a Kabinett. Just as impressive was this Spätlese from Le Gallais, a second estate overseen by the Müller family since the 1950s. With relatively deep, iron-rich soils, Braune Kupp excels at producing sweeter styles; wines of great charm which reveal their complexity and nuance after many years in the bottle. 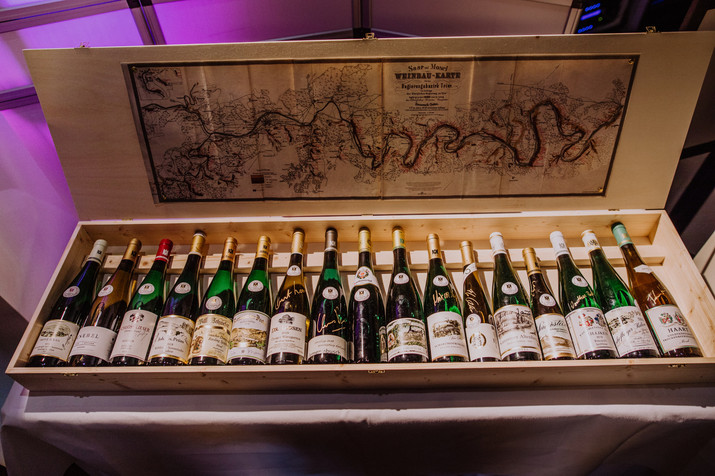 This iconic estate traces its origins as far back at the 12th century but continues to produce some of the Mosel’s most compelling Rieslings. Prüm’s flagship vineyard, Wehlener Sonnenuhr, sits across the river from the winery itself. A notably craggy site, it is well-exposed to the morning sun, capable of producing wines that combine – in the words of the great Hugh Johnson – ‘glorious honeyed ripeness, stetting off the raciness of Riesling grown on slate with deep notes of spice and honey.’ This description describes to a ‘T’ the 2020 Wehlener Sonnenuhr Auslese. The GK (Gold Capsule) bottling, containing meticulously sorted botrytised grapes, has a higher level of residual sugar counterbalanced by a glorious herbal freshness on the finish. A Wehlener Sonnenuhr Auslese from the 2004 vintage, tasted at the winery last week, had become notably drier but remained a babe in the arms. The 2020s can be cellared with confidence for many decades