‘Only he can understand what a farm is, what a country is, who shall have sacrificed part of himself to his farm or country, fought to save it, struggled to make it beautiful. Only then will the love of farm or country fill his heart’
– Antoine de Saint Exupery, Flight to Arras

‘I fly because it releases my mind from the tyranny of petty things’ penned Antoine de Saint-Exupery, France’s most famous aviator. Fighter pilots excel in staying calm in the face of terror, have an eye for detail, are extremely methodical and great at problem-solving. Faced with the infiniteness of the skies and the finiteness of life, they learn to zone out background noise and focus on the here and now. Like Antoine before him, Xavier Horiot served as a fighter pilot for 18 years for which he was named Knight of the Legion of Honour. He gave up his wings in the year 2000 when his beloved grandfather Raymond Horiot passed away, leaving the family domaine to his daughter and grandson.

Stratospheric vineyard prices have caused many a feud in recent years in Burgundy and Domaine Launay-Horiot was no different. After the passing of his grandfather, Xavier wanted to respect his wishes and retain the vineyard in family hands, but found himself in a ten year legal battle with his aunt for the rights of the domaine. Xavier concentrated all of his fighting skills in this long legal battle, while also studying viticulture. He emerged victorious in 2011, an aviator gliding down out of the darkness of night to repossess his miraculous garden on earth.

Xavier sold the fruit of his first two vintages just to pay off the legal debts and in 2014 was finally able to make his first vintage under his own name. The new family crest shows two blue intersecting swords that have pilot wings as handles and the blades are formed liked roots.

Today Xavier is joyful to have both feet firmly on the ground. Among his 4 hectares, he owns classical Pommard terroir with 2ha of Pommard Les Perrières, which was originally planted in 1902 and a range of old vines in his 0.17ha of Clos Blanc, 0.59ha of Chaponnières and 0.09ha of Les Rugiens Bas. He also owns a tiny 0.17ha parcel of Latricières Chambertin (located next to Pierre Duroché’s vines) and 0.16ha of Chambertin (next to Lalou Bize-Leroy).

If one village of Burgundy is benefitting from the increased warmth, then it is Pommard. In the past, the humid clay soils of Pommard contributed to increased foliage development, which in turn produced slightly rough, big tannins that gave much of Pommard a reputation for ‘rusticity’. No longer! With the climate that we have seen since 2017, the humid clay soils are an enormous blessing and with the warm dry weather, it is now responsible for retaining wonderful silky tannins in the wines, which we have seen again in 2020. The 2020 Burgundy Vintage report can be found on our website HERE.

This is Xavier’s 7th vintage and his commitment has not gone unnoticed. Over the years, he has been lauded by all the great critics including Tim Atkin MW, Neal Martin, Allen Meadows,  Michel Betanne and Jancis Robinson MW. We are very pleased to be the UK exclusive agents for Domaine Launay-Horiot. 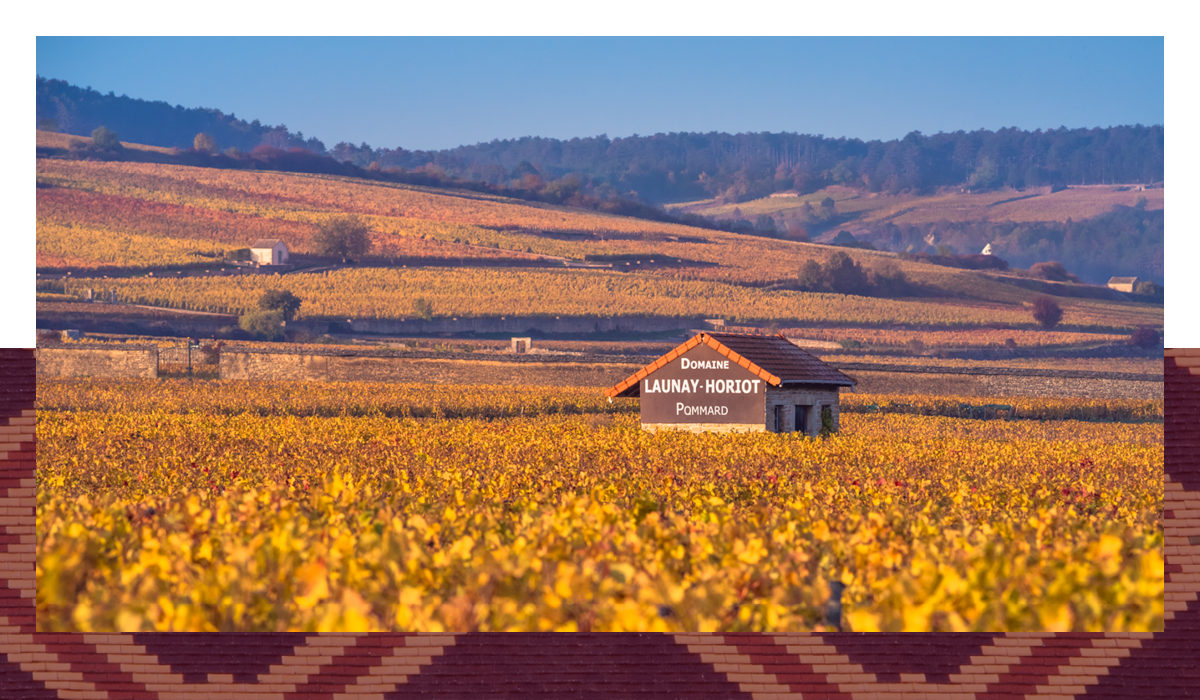