Having mainly tasted Aligoté en primeur, my experience of Aligoté has been very limited and was always combined with the anticipation of the ‘greater’ wines to come. I was aware of the Aligotéurs and I have witnessed the excitement Charles Lachaux and Nicholas Faure have when they talk about Aligoté, but I didn’t share their enthusiasm. Perhaps in despair of my closed-book view, or simply to prove a point, Thomas sent me a bottle of Aligoté by Arnoux Lachaux in January. I have to admit that it was a pleasant surprise. It didn’t strip my teeth with acidity nor was it watery, it had good fruit concentration and would have fooled me into thinking it was Chardonnay. It resulted in me buying a few bottles of Aligoté with mixed results until I tasted a glass of Sylvain Pataille. I was impressed by the wine and it led to the idea of a hosting an Aligoté evening (Thomas had been suggesting this for ages). The date was set for Friday 4th June.

A bit about Aligoté…Aligoté is the result of a crossing between Pinot Noir and Gouais Blanc, making it a sibling to Chardonnay and Gamay. Unlike its parent Pinot Noir, Aligoté is a vigorous vine (far more vigorous that Chardonnay) that buds early, putting it at risk of spring frost. It is a true Burgundian grape and a historical grape. Jancis Robinson MW in her book Wine Grapes writes that the first likely reference to Aligoté was in 1780 by Dupre de Saint-Maur ‘under the name Plant de Trois, an old synonym referring to the fact that its branches usually bear three bunches each’.

Aligoté accounts for 6% of all vines in Burgundy (about 1ha or 24 ouvrées according to the Vins de Bourgogne). According to Jancis, the vineyard area planted to Aligoté in France is about the same as it was 50 years ago, despite a dip in the 1980s. It is mainly grown in Burgundy: from the southern end, throughout the Cote d’Or as well as in Chablis. The natural high acidity means that the best Aligoté should be grown on prime sites that encourage ripeness, but these are sites usually reserved for Pinot Noir and Chardonnay. Anthony Hanson in 1982 suggested that Aligoté fared well in a few Burgundian villages, including Pernand, Villers-la-Faye, St-Aubin, Chagny, Rully and Bouzeron. The Bourgogne Aligoté AOC was granted in 1927. Bouzeron, the only Burgundian village dedicated to Aligoté, was recognised as the only village AOC in 1979 after Aubert de Villaine and his wife Pamela fought tirelessly to have it recognised as such.  The original AOC ‘Aligoté de Bouzeron AOC’ was  changed simply to ‘Bouzeron’ in 1998. It is the only place where there is a maximum legal yield for Aligoté at 45hl/ha. Aligoté can be found elsewhere in the world. The OIV shows that it is extremely popular in Eastern Europe, where it is far more dominant than in France. There are small clusters of Aligoté in the New World, planted by true Burgundy enthusiasts like the late Jim Clendenen, but not sufficient to be even noted by the OIV.

The key characteristic of Aligoté is that it is naturally high in acidity. As a result, with high yields this can create an insipid highly acidic wine (probably best matched with kir). Yet, this acidity is also its greatest asset. It can create a nervy or mineral core, which balanced by the richness of the wine has the power to create truly great wine. With an eye on global warming, it comes as no surprise that the Burgundians are increasingly focussing on this variety.

Finally….The Aligoteurs! The Aligoteurs is an organisation founded in 2018 to celebrate, promote and preserve Aligoté. It was founded by chef Philippe Delacourcelle as well as the winegrowers Sylvain Pataille, Laurent Fournier, Pablo Chevrot, Jérôme Galeyrand, Manuel Olivier, Anne Morey and Nicolas Faure and today counts about 50 growers among its members. It is a great place to start any research on the variety.

The Wines were tasted in flights of 4 wines with the winning wine of each flight creating a final flight. All wines were blind, even for me, so there was no one to lead the discussion, but everyone was keen to participate.

By luck, the first flight turned out to be extremely strong with Arnaud Ente, Ramonet, Thibault Liger-Belair and Arnoux Lachaux. Wine 1 (2017 Bourgogne Aligoté, Domaine Arnaud Ente) was extremely reductive and therefore was not an easy wine to start with. It came as a joint third of the flight, but two people (including myself) picked it as a favourite. Most struggled to get past the reductive nature of this wine (it reminded me of tasting Prum EP a decade or so ago). I loved it for its tightness and structure and would love to see it in 10 years time. Wine 2 (2018 Bouzeron, Jean Claude Ramonet)  came from the only Burgundian village dedicated to Aligoté (Bouzeron) and it was very restrained on the nose with hints of creamy cheese. The palate was surprising exciting after the nose with a real vibrancy, texture and hints of exotic fruit. Wine 3 (2018 Bourgogne Aligoté Clos des Perrieres la Combe, Thibault Liger-Belair) was a light bodied,  unpretentious refreshing white with a salinity on the finish. It was voted the second favourite wine in the flight.  Wine 4 (2018 Bourgogne Aligoté Les Champs d’Argent , Domaine Arnoux-Lachaux) won the round. It was restrained on the nose but textural on the palate with a rounded palate. ‘Lovely’ I wrote, reflecting the fact that it was a wine that makes me smile. It was zingy with a good finish albeit not as long as Wine 1. Doing my research for this wine, I found out that Charles started the negociant business to make this wine, despite it being from Domaine fruit (that used to be sold). The label is designed by Charles’ wife and the rose on the label is in honour of his daughter Rose.

There was a lot of unanimity in this flight. We had an extra taster but, almost unanimously, we voted for Wine 5 (2017 Bourgogne Aligoté Les Auvonnes au Pépé, Domaine Sylvaine Pataille). The first mention from the table when we started tasting this flight (and this wine) was ‘wow, so now we are getting serious’. I found it once again had a restrained nose, but with a very, very, very long palate. The mouthfeel reminded me of Coche with a wonderful textural quality and smokiness on the finish. Simply gorgeous, though still very young. Wine 7 (2017 Bourgogne Aligoté, Domaine Anne Gros) and Wine 8 (2018 Bourgogne Aligoté, Domaine Bernard Moreau) are a pair in my head. They were both easy drinking and simple. What is interesting to note is that looking at the scores, no-one rated the Moreau badly.  In its simplicity it was very attractive and I would happily drink this at a drinks party or wedding. While some people gave Wine 9 (2018 Bourgogne Aligoté, Domaine Jean-Hugues et Guilhem Goisot) the lowest possible score, overall it came second of the flight. Perhaps this is due to the fact that it was very distinctive. It was structured with noticeable green apple skin notes and a floral lift that is reminiscent of Viognier. A very distinctive style of Aligoté.

This was another fascinating flight. Wine 10 (2017 Bourgogne Aligoté ‘Tilleuls’, Domaine Chevrot) was quite a big wine, the most pronounced wine of the tasting with honeyed notes and it felt almost like forced winemaking. Wine 11 (2019 Bourgogne Aligoté “L’Aligator”, Domaine des Rouges Queues) was very pretty with floral notes but felt a bit insipid after Wine 10. Though it slowly opened up in the glass to reveal its layers, it did not seem to reach the heights of Wine 9 and 12. It was a close call between Wine 9 (2018 Bourgogne Aligoté ‘La Corvée de Bully’, Nicholas Faure) and wine 12 (2017 Morey-St-Denis 1er Cru Clos des Monts Luisant, Domaine Ponsot). I had brought the latter, but failed to spot it and chose the 2018 Nicholas Faure as my wine of the flight.  I loved the Faure for the waxy textural style with match-struck notes on the finish. The Ponsot was the only one that had notes of brioche and almost reminded me of aged Champagne. Perhaps why it became the winner of the flight!

The Judgement flight was a repeat blind sample of the winning wine from all three wines flights;

There was an unexpected unanimity about the winning bottle: Wine 5. For me it was the clear winner for its complexity, balance, length and texture. When it came to revealing all the wines in the flight, it caused much laughter as much guesswork had been done about the identity of Wine 5 and all had been wrong!

Flight 5 – A treat to finish

We finished the tasting with two whites in two Zalto glasses. The first was yeasty, indulgent with a lace texture. It may not have been the most complex of wines in terms of layers or length, but it was sheer joy and for me the bottle of the night. The second wine was far more concentrated, with more layers of complexity and a far longer finish. Though the first wine felt more mature in terms of its drinking window, I wondered if the second wine was older but a better vintage. It turned out to be 2007 Domaine Jean-François Coche-Dury Aligoté and 2005 Domaine Jean-François Coche-Dury Aligoté! The Aligoté comes from a small plot just behind the house and this flight was a total treat yet also a perplexing experience. I would, at this point in time, far prefer to drink the 2007 than the 2005. The sense of balance on the 2007 was better (at this point) and it was true indulgence. I would love to think that the 2005 will become like this in the future, but I am not so sure. The 2005 was the more superior wine, but possibly less balanced. It is the first time that I had to choose between Quality (concentration, complexity and length) versus Balance (arguably a sign of quality too). For me, balance remains the most important. This generous flight gave a real sense of perspective about the age-ability of Aligoté and put in perspective everything we tasted.

So what did I learn? I found there were wines with far more complexity than I would have expected and I will be more serious about Aligoté in the future.  There are also a serious array of expressions of Aligoté (and a lot of different approaches to winemaking). As I researched Aligoté in advance of the tasting, I realised that growers that are excited about Aligoté and are focussed on making serious age-worthy Aligoté have yields of 20-30hl/ha, while many produce Aligoté with yields of 50-70hl/ha. I do believe that yield is a key element to the wines that were shining at the tasting. 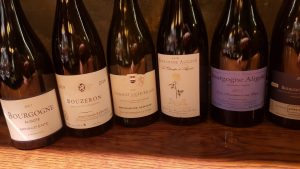 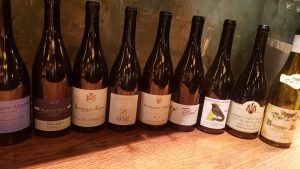