This month’s Decanter article on Maison Albert Bichot has spurred me to share some recent memories of their MD, Albéric Bichot, one of the most influential, witty and charming figures in Burgundy.

“Albéric Bichot represents the 6th generation to run the family house and is regarded by many as a visionary and someone who has taken the quality of Bichot’s wines to levels unforeseen just two decades ago. He is also one of the most endearing, humorous and generous managing directors one might encounter – traits which seem to infuse Bichot’s wines. In typically self-effacing style, he compares himself to the ‘conductor of an orchestra, proud to bring people and their talents together over a common project.” Andy Howard MW

Back in Feb 2019, Albéric joined me and several Burgundy fans for dinner at La Trompette, a much-loved London eatery.  On a quiet side-street in Chiswick, La Trompette has, over the past ten years, been arguably one of the most consistent wine-friendly restaurants in London. Their private dining room, where this dinner took place, is a space I’ll be rushing back to once this lockdown is over.  We kicked off the evening with Bichot’s extremely quaffable NV Crémant Pure Blanc de Blancs, then enjoyed a glass of Chablis Grand Cru (Domaine de Long-Depaquit Vaudésir 2015) before launching into a quartet of Domaine du Clos Frantin 2012s – Vosne-Romanée, Nuits-St-Georges, Echézeaux & Clos Vougeot (from magnum) – which were intersected by two magical 1er cru 2013s,  Frantin Vosne-Romanée Malconsorts (where Bichot have the largest holding) alongside one of their smallest production wines, Chambolle-Musigny Les Amoureuses.  If this doesn’t sound indulgent enough, there was more Grand cru to follow, with two vintages of Corton Charlemagne, Domaine du Pavillon, 2015 and 2014 in magnum, both of which were exceptional.  Ten wines from three different Domaines, all from the upper echelons on Albéric’s Burgundy empire. 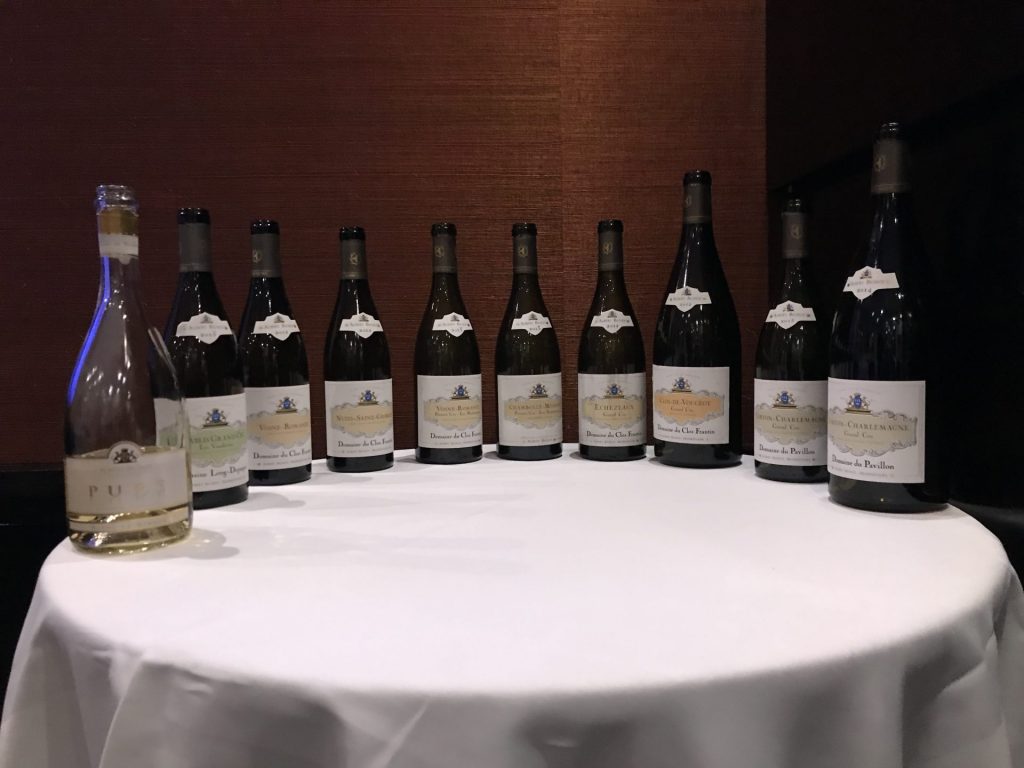 Such a dinner might, in the current COVID lockdown times, seem a little OTT.  And I am questioning when we find ourselves in the new normal, whether I should pair things back when organising similar fares. We’ll see.  At the time, it felt like a celebration of many generations’ hard work and a moment to showcase quite how far Maison Bichot has come in making truly outstanding wines.  It was also an opportunity to savour a broad range.  And I was left wanting more! Albéric’s wines are never overworked or heavy; they are approachable in youth, have a clear focus on purity of fruit and terroir expression and, at the smarty end, will age gracefully for 20+ years.  In my mind, they are amongst the best value wines in Burgundy.  The 2012 Grand Crus were, as you’d expect, still wound tight, not severe, just demanding a little more time in the bottle, but the village wines are a delight to drink now.  The 2013s both showcased what a beautiful vintage it is to drink now.

Albéric commands a room with ease, but never lectures or bangs-on.  Instead, he offers up an anecdote or two and several sharp quips.  Albéric downplays the grandeur of such hallowed vineyards, preferring always to talk of wine as a beverage – great bottles to be enjoyed with friends, not to be over-analysed or intellectualised. His wines are indeed delightful, but wines like the 2012 Clos Vougeot, 2013 Amoureuses and 2014 Corton Charlemagne strike an emotional chord with me.  But if I said this across the table to Albéric, he’d tell me to pipe down for being too salesy. He’d always prefer to let the wines do the talking.

The most definitive statement I’ve heard him mention on a wine was at lunch in Beaune last November, the final glass of a glorious trip to Burgundy. I was travelling with a bunch of Burgundiphiles, and we were all bleary-eyed after three long days tasting.  Albéric had invited us to his grandmother’s house, a property that sits just outside the Roman walls in Beaune that I’d walked us past twice before entering.  Its unassuming outside was a stark contrast to the elegance and refinement of the inside.  We were, as a group, severely under-dressed, but any embarrassment we might have felt was quickly forgotten as the wines and Albéric got into full flow.  The final wine of a sumptuous four-course lunch was served from magnum, a 2016 Clos de la Roche Grand Cru. Albéric simply stated that it was beautiful, a perfect wine in his mind.  I didn’t hear anyone disagree. Bichot’s 2016 reds have a wild character that I love, a lightness of touch, and so much energy.  They are worth seeking out, across the range.

And then a couple of weeks ago, we had a lockdown celebration of Bichot wines; a zoom call with a select band of clients, all fans of Bichot, to see Albéric at home, relaxing with his family.  His wit over video is as sharp as ever.  A 40-minute call, a bottle of his lovely wine enjoyed, and I’m transported to Burgundy. Before the call ends, Albéric sits with his youngest daughter on his knee, and we’re all doing the Burgundy hand waving LaLaLa dance.  Lockdown on such nights doesn’t feel too bad at all.

Bichot make wines from Beaujolais to Chablis and own 107 hectares of vineyards across six estates, but Stannary focus on just three; Domaine Long-Depaquit in Chablis, Domaine du Clos Frantin (Nuits-Saint-Georges) and Domaine du Pavillon (Pommard).  If you’re not familiar with the wines, I recommend the following six wines, offered at lockdown prices.

by Thomas Bird, Head of Sales at Stannary Wine

9 Questions with Inspiring Women in Wine Gigliola Giannetti is the founder, owner and winemaker…

In Conversation with Diana Seysses

9 Questions with Inspiring Women in Wine To celebrate International Women’s Day, we are launching…

“With a drop of Champagne, you can change your own universe” Phillippe Stark Hurray for…
Discover More Blog Posts