We always celebrate the last Friday of the month with Champagne Friday and this month we have chosen 2012 Pol Roger.

Pol Roger has long been a personal favourite. The vintage (straight vintage, rose and BB) are in my opinion the best value Champagnes in the market compared to their quality, and subsequently, Pol Roger is the most featured wine in my cellar. I had a bottle of the 2012 this month, which blew me away. It seemed the logical choice for Champagne Friday.

Pol Roger is a small house for a Grand Marque Champagne, and unusually for a Grand Marque champagne, it is still family-owned. Pol Roger is probably best known as Winston Churchill’s favourite Champagne and famously named his beloved race-horse Pol Roger. Though he never tasted the Champagne that was named after him, he was a huge fan of vintage Pol Roger. It is said that during his life, Winston Churchill consumed over 40,000 bottles of Champagne and the archives show that in 1908, the year he married Clementine, he ordered 108 bottles + 84 half bottles of 1895 Pol Roger as well as 48 halves of 1900. This was long before he met Odette Pol Roger in 1944, which was the start of a long friendship.

Unknown to many, it was not Winston Churchill who made Pol Roger famous in the UK (though it has certainly intensified the link). England, not France, was Pol Roger’s first main market and records show that the  1874 vintage was widely distributed around English clubs. In 1876 the Royal Cellars first placed their order and Pol Roger subsequently received its first royal warrant in 1877 from Queen Victoria.

Vintages have always been important at Pol Roger and celebrated for the unique character they bring to each cuvee. 2012 has broken the tradition that legendary vintages occur only at six year intervals (1990, 1996, 2002, 2008). Despite being released in quick succession to the 2008 and being comparative in quality, there is a real difference in style. The opulence of 2012 (rather than the linearity of 2008) has the Champenoise casting their eyes as far back as the superlative 1990 (with some going further back to 1959) to find a vintage they hold in equal esteem. 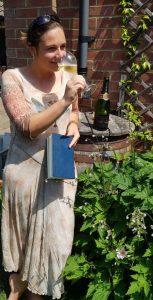 I tasted the 2012 Pol Roger in the garden. Delicious by itself, it has the concentration to be served with food and has the power, length and complexity to benefit from long term ageing (happily for another decade or two). My tasting note reads “I absolutely love this. It remains the best buy (in terms of value for quality) for vintage Champagne. It is impeccably balanced with a stony mineral note and fresh white orchard fruit with a long honeyed finish. It is perfect on a warm summer day, but serious enough for dinner or a blind tasting. I adore the nose and the long long length. Having re-tasted it, I rated it higher than the 2008. It is superb now but has the potential to age for a long time. Bravo! It is made with the traditional house blend of 60% Pinot Noir and 40% Chardonnay sourced exclusively from Grand and Premier cru vineyards in the Montagne de Reims and the Côte des Blancs. It has been aged for seven years on lees before disgorgement (a year longer than the Blanc de Blancs) and has all the qualities to age.”

It was a great choice for Champagne Friday and I should probably finish with Winston Churchill’s famous quote “a magnum is the perfect size for two gentlemen to have over lunch, especially if one isn’t drinking.”

For those interested in purchasing the Champagne, we have it available at £295 per 6 bottles in bond or £375 for three magnums in bond.

– Jason Haynes, Burgundy Buyer Probably the less said about the 2021 vintage the better…

The combination of hastily organised, last minute family holidays, and the dreaded pinging, left us…

Having mainly tasted Aligoté en primeur, my experience of Aligoté has been very limited and…
Discover More Blog Posts